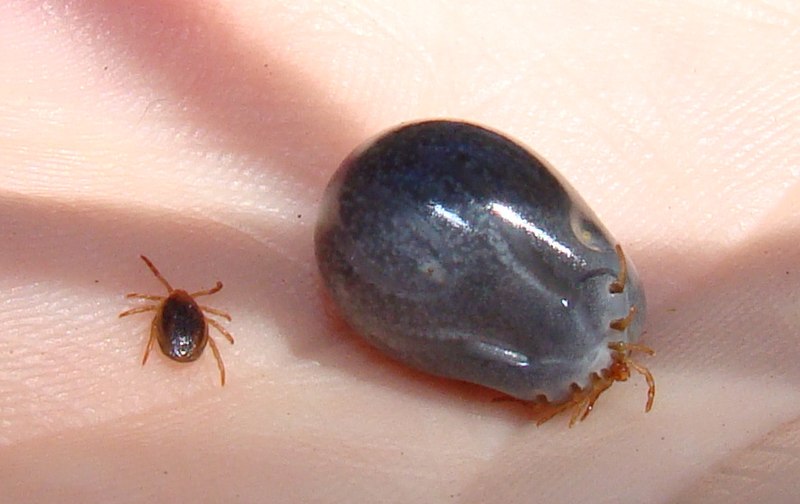 Deer tick before and after engorging.

There is nothing like beating a subject to death. But, in this case, it’s worth every word.

You have to be living in a cave not to know that deer ticks are at an all time high. They are everywhere. Friends and family have told me stories about their encounters with the pest, and they all have one thing in common: They have all had multiple numbers on them at one time.

Also, as you know, deer ticks are hazardous to your health, primarily because they are the carriers of the dreaded Lyme Disease. In the last decade alone, the population of ticks of all kinds has ballooned in the United States. The number of ticks that carry Lyme disease has been on the rise in the mid-Atlantic states, and has skyrocketed throughout the Northeast. It has gained a reputation as a serious health problem in many areas.

Only adult female ticks and nymphs can transmit infections through their bite. Male ticks attach, but they don’t feed or become engorged. Adult females have red and brown bodies and are larger than males. Nymphs are actively feeding between early April and early August. 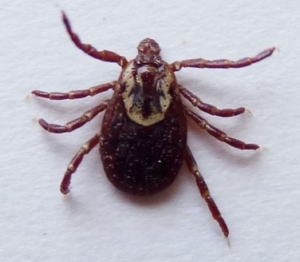 Deer ticks live two to three years, and in that time usually enjoy three blood meals. In the spring and summer of its second year, a nymph will take its second meal. They insert their mouth parts into the skin much like a corkscrew, which ensures them a nice tight grasp. They often take up to five days to complete their meal.

This fact is key to reducing panic when discovering a tick. An infected tick must be attached to its host for at least 24 hours, and up to 48 hours to transmit the disease. It’s the very reason for checking your body right away after any possible exposure to a tick-infested environment.

Deer ticks crawl. They usually grab onto people or animals that brush up against plants near ground level, and then they crawl upwards to find a quiet place for their blood meal. Although many sources will state that ticks don’t land on you from an overhanging tree branch, many people have insisted it has happened to them.

Ticks live in wooded, brushy areas that provide food and cover for mice, deer and other mammals. The ideal tick environment is humid. Your exposure will be greatest along trails in the woods and fringe areas between woods and the border, where they will wait patiently on the tips of vegetation for an unsuspecting host to walk by.

Life is too short to avoid the outdoors during our abbreviated spring, summer and fall. In Maine, that is about half the year. There is no need to be brave, just be smart: cover your body; wear repellant; check yourself for ticks, if you find a tick, remove it immediately; shower soon after being outdoors – last Saturday, after working around at camp, I found four ticks on the floor in the shower; throw clothing in the dryer, that will kill any ticks present; and finally, if you are concerned, don’t hesitate to contact your doctor.

The best way to remove a tick is to use fine-point tweezers and grab the tick as close to the skin surface as possible. Pull backwards gently but firmly, using an even, steady pressure. Do your best not to jerk or twist. Don’t squeeze, crush or puncture the tick’s body, the fluids inside may contain infection-causing organisms. After removing the tick, wash the skin and your hands thoroughly with hot soap and water. If any mouth part of the tick remain in the skin, leave them alone. They will be expelled on their own. It could take weeks. Trying to remove them will only cause you unnecessary pain.

For the deer tick, Ixodes scapularis, deer are the preferred host of the deer tick, but they can also be found in small rodents. After the female is engorged, the tick drops off and overwinters in the leaf litter of the forest floor. The following spring, she will lay several hundred to a few thousand eggs in clusters. They are very hardy creatures. Considering the mild winter we just experienced, they are active in record numbers. They will be active even after a moderate to severe frost, as daytime temperatures can warm them enough to keep them actively searching for a host. In the spring, they are one of the first invertebrates to become active.

It may be monotonous to keep hearing about the health hazards of being infected by a deer tick, but it’s one that needs to be repeated.

Before Mookie Betts in 2017, who was the last Red Sox player to lead the team in home runs and stolen bases in the same season?