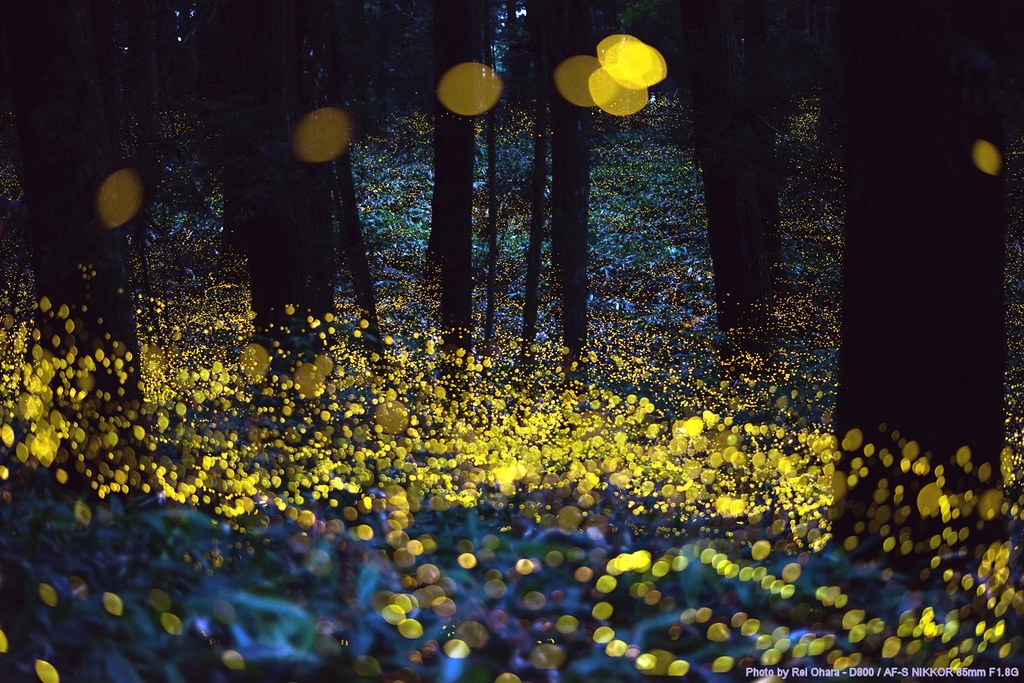 Fireflies in a forest.

One night last week, after I did my usual bedtime reading, and my wife was playing the mind games on her tablet, I turned out the light and rolled over to get some sleep. Suddenly, my wife said, “there’s a lightning bug in here.” I looked up, and sure enough, there he was on the ceiling.

I didn’t want to crush it, because we are seeing fewer and fewer of them. So, I managed to corner it, pick it up with a piece of paper, and send it on its way, outdoors.

Now we rewind to a year ago when we were sitting by a campfire when we noticed a lightning bug. Notice I said “a,” like in one, uno, solo. It was the first lightning bug I had seen in a while. I remember when I was growing up, we used to go visit relatives in Canada, and sometimes go to a camp where we would see hundreds of lightning bugs flying around in a field. We used to capture them in a jar. You just don’t see that anymore.

Anyway, lightning bugs can make summers magical, but there is more to learn about these beauties.

First off, lightning bugs are actually fireflies. Fireflies are cute and elegant by day, but downright dazzling after darkness falls. But behind their charming facade, fireflies are fascinating little insects. Consider the following facts: 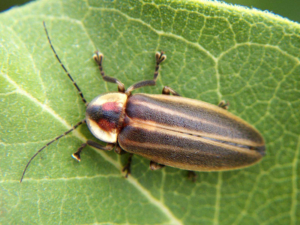 They are beetles, not flies. Fireflies are nocturnal members of Lampyridae, a family of insects within the beetle order Coleoptera, or winged beetles. Yes, they are officially beetles.

They are alchemists, poetically speaking at least. While they don’t actually turn base metals into gold, they do create light as if by magic. When a chemical called luciferin (note the same Latin root as Lucifer) inside their abdomen/tail combines with oxygen, calcium and adenosine triphosphate, a chemical reaction occurs that creates their spectacular light.

Firefly light is incredibly efficient. The light produced by the firefly is the most efficient light ever made. Almost 100 percent of the energy in the chemical reaction is emitted as light; in comparison, an incandescent light bulb only emits 10 percent of its energy as light, the other 90 percent is lost as heat.

The main reason lightning bugs flash is to attract mates. Among most but not all species of North American lightning bugs, males fly about flashing while females perch on vegetation, usually near the ground. If the female sees a flasher and she’s ready to mate she responds by flashing right after the male’s last flash. A short flash dialogue takes place as the male flies closer and closer, and then, if all goes well, they mate.

They come in a rainbow of colors. Well maybe not the whole spectrum, but they do come in yellow, light red, green and orange.

They taste disgusting. Not that we were planning on snacking on fireflies anytime soon, but for predators that might like a light meal, beware the lightning bug. Firefly blood contains lucibufagins, which sounds like something out of a Harry Potter book but is actually a defensive steroid that tastes really awful. It is similar to that found in some poisonous toads. Predators associate the bad taste with a firefly’s light and learn not to eat bugs that glow.

However, their numbers are declining. If you’re seeing fewer fireflies each summer, you’re not alone. Evidence suggests that firefly populations may be on the decline, most likely due to a combination of light pollution, pesticide use and habitat destruction. For example, according to Smithsonian.com, if a field where fireflies live is paved over, the fireflies don’t migrate to another field, they just disappear forever.

What’s going on? Bees are on the decline; butterflies are suffering, could fireflies be facing tough times as well?

The scientific and citizen consensus is “yes.” Malaysia even holds an international symposium dedicated to conservation of the firefly. Scientists have for years been warning that the world’s estimated 2,000 species of fireflies are dwindling.

And is it any wonder? As the manmade environment continues its undying march into the natural world, where are these things supposed to live? Fireflies breed and exist in the woods and forests, along lakes and streams, in dense gardens and unruly meadows. Where are they supposed to do their firefly things when those places are paved over and built upon?

All of it doesn’t bode well.

“Fireflies are indicators of the health of the environment and are declining across the world as a result of degradation and loss of suitable habitat, pollution of river systems, increased use of pesticides in agro-ecosystems and increased light pollution in areas of human habitation,” notes the Selangor Declaration, a firefly advocating document. The decline of fireflies is a cause for concern and reflects the global trend of increasing biodiversity loss.”

Fireflies are part of our heritage; they are an iconic creature and have played a role in many, many cultures. They are the epitome of summer evenings, for many of us they served as an introduction to the wonders of nature. If we lose the fireflies, we lose an important invisible thread that connects us to the magic of the natural world. And as a species, we can’t afford to lose that right now.

Complete the golfing adage: “You drive for show, but putt for….”

Roland’s Trivia Question for Thursday, July 8, 2021 GROWING YOUR BUSINESS: Be careful what you say
Scroll to top