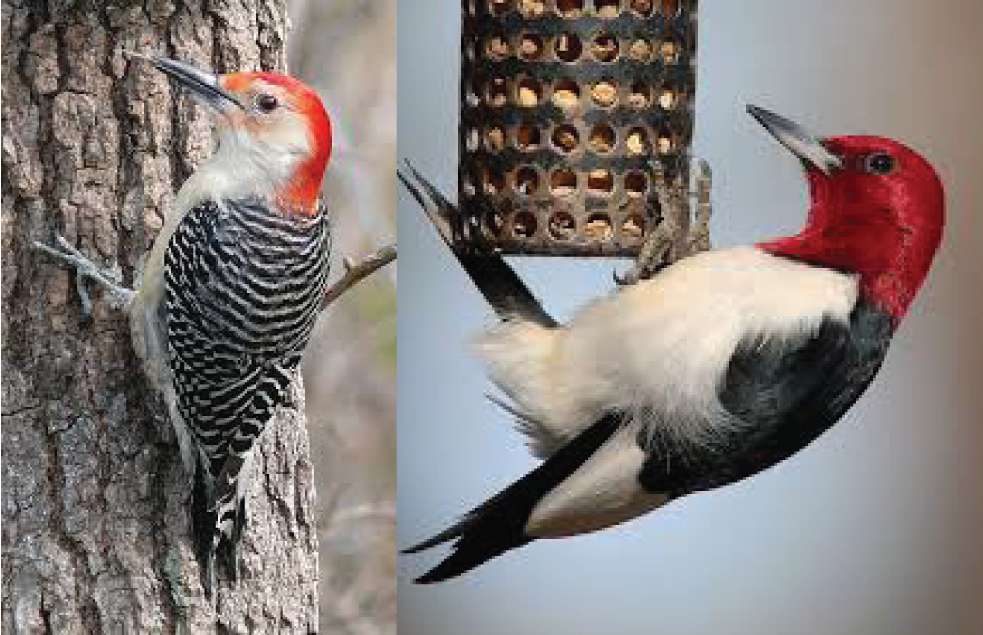 The red-bellied woodpecker, Melanerpes carolinus, is a medium-sized woodpecker. It breeds mainly in the eastern United States, ranging as far south as Florida and as far north as Canada. Though it has a vivid orange-red crown and nape it is not to be confused with the red-headed woodpecker, a separate species of woodpecker with an entirely red head and neck that sports a solid black back and white belly. The red-bellied earns its name from the pale reddish blush of its lower underside.

Adults are mainly light gray on the face and underparts; they have black and white barred patterns on their back, wings and tail. Adult males have a red cap going from the bill to the nape; females have a red patch on the nape and another above the bill. The reddish tinge on the belly that gives the bird its name is difficult to see in field identification.

Males tend to call and drum more frequently than females, but both sexes call. The drum sounds like 6 taps. Often, these woodpeckers “drum” to attract mates. They tap on hollow trees, and even on aluminum roofs, metal guttering and transformer boxes in urban environments, to communicate with potential partners.

These birds mainly search out arthropods on tree trunks. They may also catch insects in flight. They are omnivores, eating insects, fruits, nuts and seeds. Their breeding habitat is usually deciduous forests. They nest in the decayed cavities of dead trees, old stumps, or in live trees that have softer wood such as elms, maples, or willows; both sexes assist in digging nesting cavities. Areas around nest sites are marked with drilling holes to warn others away.

Though the species is not globally threatened, it depends on large trees for nesting. In areas that are extensively deforested, the birds will sometimes utilize gardens, but for the most part they simply will not be present in any numbers.

Researchers have documented that red-bellied woodpeckers have the tendency to nest in clear areas with only few trees. Studies have indicated that close canopy areas do not impact the bird’s nesting behavior; however, further studies are needed and are in progress. Red-bellied woodpeckers are territorial during the nesting season and they breed once per year. A pair-breeding woodpecker begins nesting in April or May.

The woodpecker uses its bill for foraging as a chisel drilling into bark or probing cracks on trunk of trees. In this manner, the red-bellied woodpecker is able to pull out beetles and other insects from the tree with the help of its long tongue.

My red-bellied woodpecker just shows up at the feeders and helps himself.