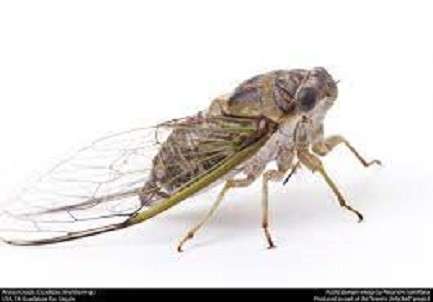 While browsing through some old emails recently, I noticed one that I had planned to respond to, but as often happens, I was sidetracked and never got back to it. It was an email with photos of cicadas with an inquiry. I apologize to that person for not getting to this sooner.

Cicadas are green bugs, usually one to two inches in length with prominent eyes set wide apart, short antennae and clear wings. They have an exceptionally loud song, produced not by stridulation (making shrill or chirping sounds by rubbing certain body parts together), but by vibrating drumlike tymbals rapidly.

The “singing’ of male cicadas is not stridulation such as many familiar species of insects produce, like crickets, for example. Instead, male cicadas have a resilin structure call a tymbal below each side of the anterior abdominal region. Contraction of internal muscles buckles the tymbals inwards, thereby producing a click; on relaxation of the muscles, the tymbals return to their original position, producing another click. By rapidly vibrating these membranes, a cicada combines the clicks into apparently continuous notes. Only the males “sing.” However, both males and females have membranous structures called tympana by which they detect sounds, the equivalent of having ears.

To the human ear, it is often difficult to tell precisely where a cicada’s song originates. The pitch is nearly constant, the sound is continuous to the human ear, and cicadas sing in scattered groups.

The question posed was as to whether it was a periodic cicada, which spend most of their lives as underground nymph, emerging only after 13 to 17 years. This may reduce losses by starving their predators and eventually emerging in huge numbers that overwhelm and satiate any remaining predators.

At least 3,000 cicada species are distributed worldwide with the majority of them being in the tropics. Most are restricted to a single biogeographical region and many species have a very limited range.

Many of North American species are in the genus Neotibicen: the annual or jar fly or dog-day cicadas (so named because they emerge in late July and August). The best-known North American genus, however, Magicicada, have an extremely long life cycle of 13 – 17 years, suddenly and briefly emerging in large numbers. When this phenomenon occurs, the noise emitted by the cicadas is deafening.

After mating, the female cuts slits into the bark of a twig where she deposits her eggs. When the eggs hatch, the newly-hatched nymphs drop to the ground and burrow. Cicadas live underground as nymphs for most of their lives at depths down to about eight feet. Nymphs have strong front legs for digging and excavating chambers in close proximity to roots where they feed on xylem sap (the woody vascular tissue of a plant). In the process, their bodies and interior of the burrow become coated with anal fluids. In wet habitats, larger species construct mud towers above ground in order to aerate their burrows. In the final instar, they construct an exit tunnel to the surface and emerge. They then molt (shed their skins) on a nearby plant for the last time, and emerge as adults. The exoskeleton remains, still clinging to the bark of the tree.

The long life cycles may have developed as a response to predators, such as the cicada killer wasp and praying mantis. A specialist predator with a shorter life cycle of at least two years could not reliably prey upon the cicadas.

Other predators include bats, spiders and robber flies. Cicadas are fast flyers and can escape if disturbed, and they are well camouflaged. They are difficult to find by birds that hunt by sight.

Cicadas have been featured in literature since the time of Homer’s Iliad. They are also mentioned in Chinese and Japanese literature. Cicadas are also a frequent subject of haiku, where, depending on type, they can indicate spring, summer or autumn.

Cicadas have been used as money, in folk medicine, to forecast the weather, to provide song (in China), and in folklore and myths around the world.

Cicadas feed on sap; they do not bite or sting in a true sense, but may occasionally mistake a person’s arm for a plant limb and attempt to feed. They are not a major agricultural pest but in some outbreak years, trees may be overwhelmed by the sheer numbers of females laying their eggs in the shoots.

The periodical cicada, which takes 13-17 years to emerge, does not exist in Maine. The Maine cicadas are the annual or dog-day species, which emerge in late July and August. It is common to discover a cicada’s shed exoskeleton on a tree (in Maine, at least) than it is to find an actual cicada. That it because they are strong fliers that spend their time high in the trees, so without the mass emergences that take place in other regions of the country, one is not very likely to encounter one in Maine very often, making them a thing of curiosity for anyone unfamiliar with them.

I have seen cicadas at my camp, but only on a few occasions.

Which former Red Sox outfielder went on to become a NASCAR truck series driver following his retirement from baseball after the 1996 season?