We have talked about the activities of nature’s little critters in the past, but it never ceases to amaze me as to what can happen in an instance.

Last week, while on vacation, I was sitting on the porch taking a break from some chores, and my wife was behind camp working in her flower garden.

Earlier, she had been filling the bird feeders and had taken a piece of suet, about half the size of a golf ball, and placed in on the ground while she refilled the cages.

Well, shortly following that, a chipmunk came out of his den, which he has many entrances to in the area, and began enjoying the morsel of suet. However, a nearby woodpecker decided that it was his, and began pecking at the chipmunk’s head. The chipmunk was undeterred by all of this and continued to eat the suet, despite taking quite a beating from the woodpecker.

Meanwhile, two mourning doves landed nearby, and decided to get in on the action. They began to approach the other two combatants, sneaking in from behind the woodpecker. At that point, I thought to myself, “this will be interesting.” Unfortunately, my wife was not aware this was going on and came around from behind the camp and began to say something to me. At that point, the confrontation broke up. The chipmunk scooted off to his den, and the three birds flew off in their own directions. We’ll never know how that would have turned out.

Later, that evening, I noticed the chunk of suet was no longer on the ground, so one of them won out on that fight. 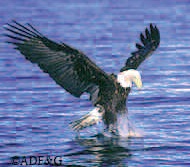 But that was nothing compared to what we witnessed on Saturday. It was a beautiful day, and we were out on the lake to take in some fishing. There was a bass tournament going on that day, so many boats and anglers were in the area. At one point, we saw a small bass, about 12-inches in length, floating in the water, obviously dead. We left it, citing that the circle of life would come into play, and some bird of prey, an osprey, bald eagle, or even a sea gull would come along and scavenge that up.

One of the things we did notice in the almost three hours we were fishing was that there were no birds present in the crystal blue sky. Usually, they are all around us.

Finally, at one point, we heard the call of a bald eagle, although we could not see it. I summized it was perched in a nearby tree and possibly warning us not to approach the dead fish, which it possibly had its eyes on for lunch.

The fish was floating approximately 15 yards away from our boat when a bald eagle came swooping down from a nearby tree and flew parallel to the water – maybe five feet from the water level – for about 20 feet, extended its talons, picked that fish right from the surface of the water, and proceeded, at the same altitude, down the shoreline and disappeared around a bend into a cove.

I have seen bald eagles scoop up fish from the lake before, but not from that close a distance. It goes without saying the scene was spectacular. Bald eagles are massive birds.

Even when you think you have seen all Mother Nature has to offer, something like this comes along.