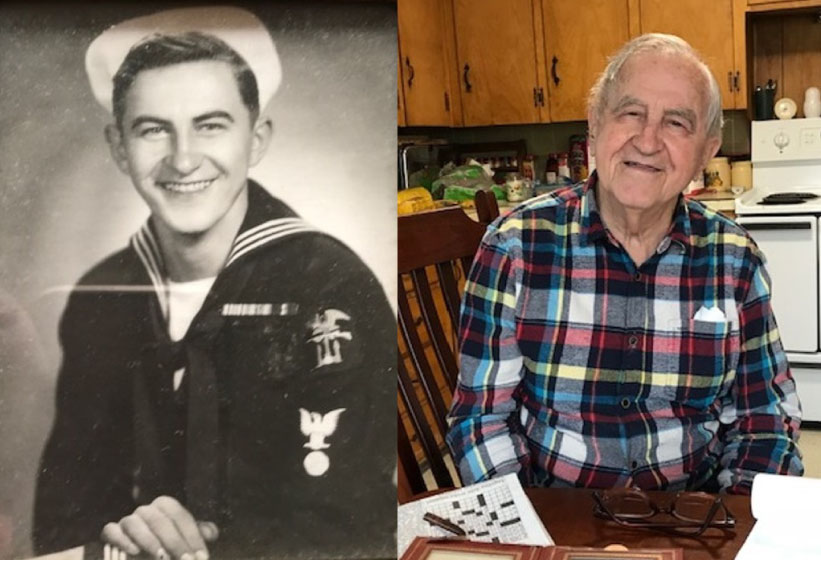 Seventy-three years ago, two local men took part in some of the most intense conflicts of World War II that took place within months of each other and brought U.S. troops closer to mainland Japan.

Albert R. Boynton, from Whitefield, was only 17 years old at the time and had enlisted in the Navy with his father’s permission. He turned 18 by the time he arrived at boot camp at Sampson, New York. After training, Boynton was assigned to the USS Goodhue APA-107. Their mission was to transport Marines, armaments, equipment and food and medical supplies to strategically located islands. 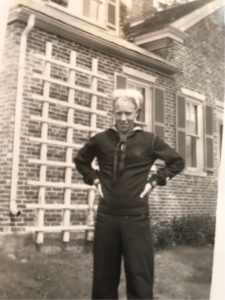 Carl J. Stenholm, of China, also a new naval recruit of 18 years of age, was assigned to the USS Hyman DD-732, a destroyer newly tooled from Bath Iron Works, in Maine. Their mission was to protect the transport vessels, destroy enemy aircraft and provide the gunfire to protect the Marines as they landed on the beaches.

By early February 1945, hundreds of ships were gathered from the Atlantic and Pacific theaters for long-range battle plans to strategically take over islands close to Mainland Japan. The Hyman and Goodhue were assigned to this complex offensive.

On D-Day February 19, 1945, the naval invasion surrounded the island of Iwo Jima. The USS Hyman was positioned close to shore, so close that Marines could be seen moving forward on land with flame-throwers. There would be no more practice drills for the 370-member crew on the Hyman. Standing dead in the water, their guns bombarded the shores clearing the way for the Marines fighting yard by yard on rough, unsheltered terrain.

By February 22, all but the western side of Iwo Jima had been silenced and the Marines were anxious to take Mount Suribachi that night. The Hyman was volunteered to provide the searchlight illumination for the Marine’s climb, knowing it would make their vessel an easy target. A close call by an enemy shell reminded the crew this was a night they would not forget. Through the dark, The Hyman’s 5-inch and 40-caliber guns were carefully coordinated over ship-to-shore radio to provide accurate coverage for the Marines.

At 0700, February 23, the Hyman was ordered to hold fire and the Marines would take the remainder of the hill by small armaments. Stenholm and his crew-mates didn’t realize at the time they would be witnessing history. Three hours after the Hyman was ordered to cease fire, the sounds from Marines’ gunfire and grenades on top of the hill also went silent. At 1020, a flag was raised by a small band of Marines indicating that Suribachi was ours. This event was the iconic flag raising of Iwo Jima.

On March 26, 1926, closer to Mainland Japan, the USS Goodhue arrived at Keramo Retto to put ashore troops and equipment for the upcoming invasion of Okinawa. Unfortunately, while returning to sea, the Goodhue underwent heavy air attack on the evening of April 2. The two anti-aircraft guns successfully defended the vessel from Kamikaze attack from the starboard. They were not as lucky with the attack heading dead ahead. The enemy aircraft hit the mast killing crew in the stern as it fell. Exploding bombs from the plane caused further casualties and fire aboard the vessel.

Boynton remembers hearing an announcement from the PA system, “Damage Control report to Shaft Alley,” and he knew they would be checking for leaks. He said he was very worried “he’d be going for a swim” and checked his life saving gear. Worrying would have to wait for later. Boynton was immediately sent to stretcher duty. The attack killed 27 and wounded 117. A makeshift morgue was set up in a hallway, an unsettling sight for young men’s first experience of death. Boynton vividly remembers taking a moment that night with his good friend Harry Hawkins, from Missouri, to pray. In the morning, they anchored into a calm bay with other damaged vessels. Following repairs, the Goodhue rejoined her squadron on April 10 to resume her transport duties at Okinawa.

The battles of Iwo Jima and Okinawa saw heavy casualties on both sides and were victories for the U.S. forces leading to the end of the war. Both men came home safe, yet still mourn the shipmates they lost along the journey. The memories and emotions of war run deep even after 73 years.

This Veterans Day, as you thank men and women for their service, take a moment to ask them to share their stories.