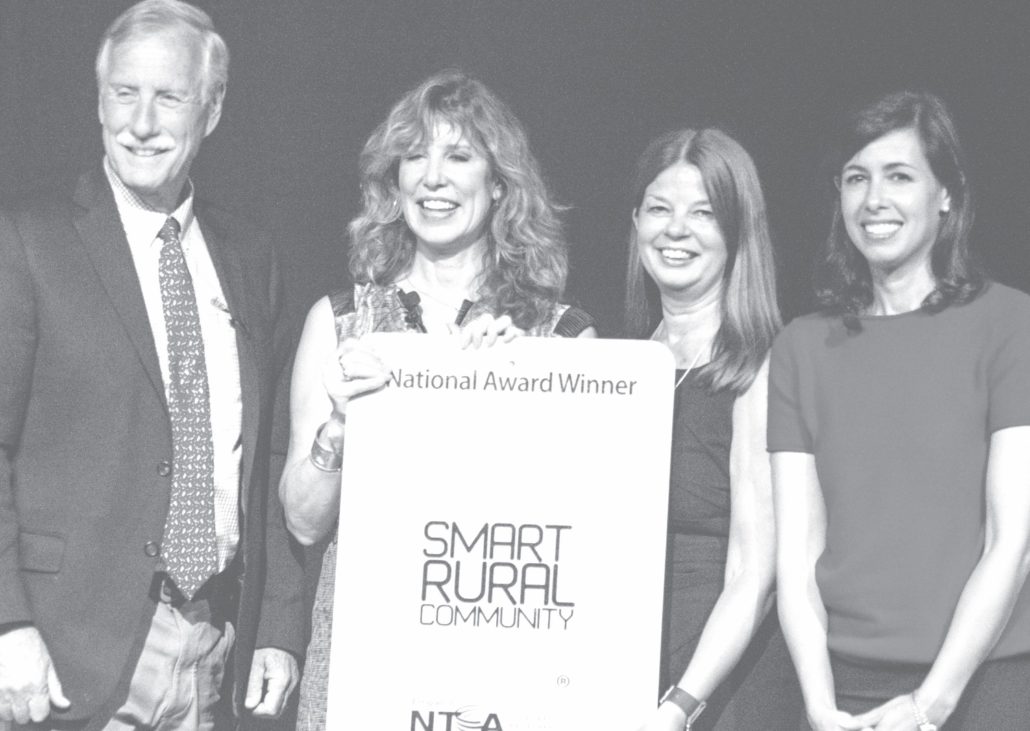 Shirley Bloomfield, CEO of NTCA, the Rural Broadband Association, visited UniTel this month to formally present the Unity-based telecommunications company with its Smart Rural Community award. Bloomfield, joined by Federal Communications Commission (FCC) Commissioner Jessica Rosenworcel and U.S. Senator Angus King, presented the award in front of an audience at the Unity College Center for the Performing Arts, before a listening session on improving broadband infrastructure.

“Historically enjoying Maine’s quality of life has come at a price,” said Laurie Osgood, CEO of UniTel. “Now technology has changed so much that it is possible to do the work traditionally performed in the big city from the most rural parts of Maine. Our role is to make sure that our infrastructure can support anyone who wants to live and work here. The leadership of Senator King and FCC Commissioner Rosenworcel has been vital in realizing the goals of closing the digital divide. The Smart Rural Community designation is a direct reflection of our team’s hard work. We live and work in these rural communities, so this award means a lot to us.”

The 2016 Smart Rural Community award follows UniTel’s construction of nearly 100 miles of its Bluestreak fiber to the home (FTTH) network in its service area and beginning late last year in downtown Belfast. Other selection criterial of note included UniTel’s lead role in promoting and sponsoring free digital literacy training in the areas it serves. This is the second national award received by UniTel in as many years for its efforts to expand access to broadband in rural Maine.

“A broadband connection is more than a technology – it’s a platform for opportunity,” said Commissioner Rosenworcel. “No matter who you are or where you live, you need access to modern communications to have a fair shot at 21st century success.”