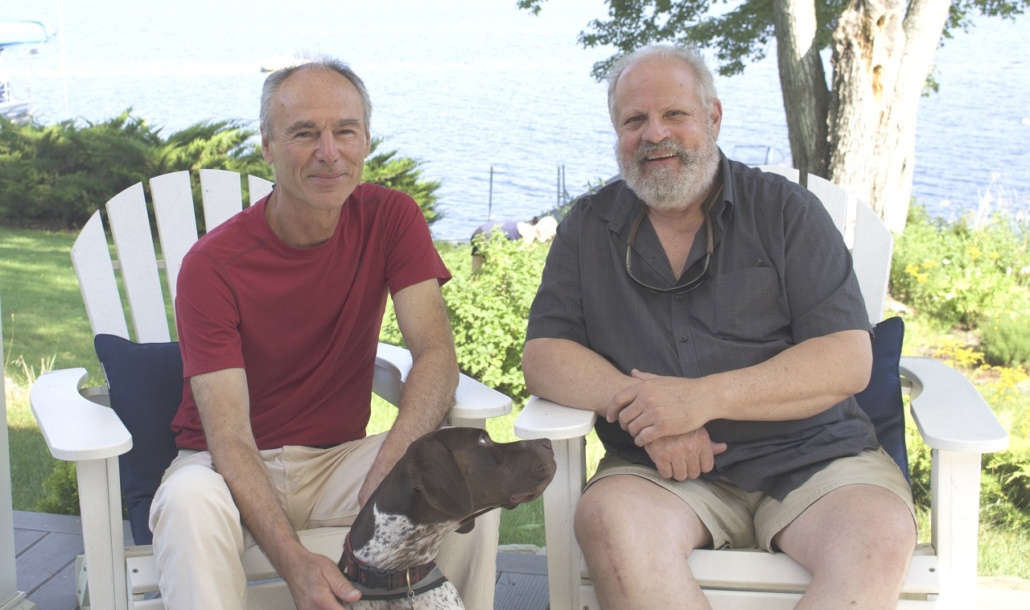 The China Lake Association (CLA) elected a new president, Stephen Greene, which established Scott Pierz as the president emeritus for his seven-year service. Scott Pierz will remain active with the CLA, aid in the leadership transition while his passion for lake management will be shared to a greater area as the Executive Director of the China Region Lakes Alliance (CRLA).

In an in-depth interview, we discovered what this shift will mean in terms of strengthening the stewardship of our natural local water resources, their visions for the future and the differences in their leadership styles.

What in their backgrounds has prepared them for these roles?

Scott Pierz grew up in Connecticut and graduated from the University of Maine at Orono with multiple degrees in philosophy, psychology and teaching. After teaching early in his career, he took a job with the State of Maine as one of the first program monitors of fuel assistance in the late seventies and eighties. In the mid-’80s, Pierz was the City of Gardiner’s codes enforcement officer and later that decade became Oakland’s first codes enforcement officer. After leaving that position, he became a planner with what is now the Kennebec Valley Council of Governments (KVCOG). In this position, Pierz wrote comprehensive plans and grants. One of these grants, a Community Development Block Grant (CDBG) for the Town of Norridgewock gave him a job as the CDBG Director of this multi-phase project. In 1995, Pierz became the codes enforcement officer of China, serving for 19 years, where he saw first hand the direct connection between building codes and lake quality.

Pierz explained this connection, “Essentially, the knowledge I gained through my codes enforcement career with various communities, along with planning and grant writing experience, have formed the foundation of my education about municipal land use and lake ecology.”

Stephen Greene’s career has also extensively prepared him for the role as CLA president. Greene is a 1973 graduate of the University of Maine at Orono (UMO). Prior to continuing on to law school, he worked industrial construction jobs in Portland, Maine. In 1979, he graduated from the New York Law School and was admitted to the New Jersey Bar. For the next four years, Greene served as an assistant prosecutor for the Hudson County (NJ) Prosecutor’s Office and tried over 20 jury criminal cases during his tenure.

After 1993 until his 2018 retirement, Greene served as Vice President and General Counsel with G&W Laboratories, Inc., South Plainfield, New Jersey, a pharmaceutical manufacturing firm.There he was responsible for all legal matters involving the company, such as FDA, mergers and acquisitions, corporate compliance, and litigation. During his tenure at G&W, he volunteered for and performed pro bono legal work for non-profit organizations under the auspices of the Pro Bono Partnership.

Green mentioned two lessons he learned in his career that he will apply in his new role as CLA president. The first is to always rely on the facts to determine a sound decision. The second lesson is to find the common ground between people’s positions.
How did Pierz and Greene develop their connections to China Lake?

Pierz has lived on China Lake since 1981. Through his 40 years of watching sunsets over the lake and hearing the calls of the loons, he feels a deep connection to the lake. He saw through his work how the lake is the heartbeat of the surrounding area and what happens within the 26 square mile watershed area surrounding the lake impacts the water quality.

Greene also has a long relationship with China Lake. He first visited the lake with his wife, Margo Rancourt Greene, who he met at the University of Maine at Orono as students. China Lake had been an integral part of her family’s life and that continued as Stephen and Margo Greene raised their own children. In 2010, the Greene’s converted their camp into a year-round residence to get more enjoyment from the lake and, now in retirement, spend the majority of the year there.

Greene explains how his passion for the lake turned into concern, “My wife and I remember very well the purity of the China Lake in the 1970s, as well as the heartbreaking changes over the next two decades. We couldn’t abandon China Lake with our deep roots here, and decided we would do something to make a difference. We joined CLA many years ago and got involved. Margo with LakeSmart and me now with the CLA board and presidency. I have been absorbing information from friends in the community, scouring regional news sources and local journalism, including The Town Line, as well as listening to non-profit groups with similar missions as the China Lake Association.”

What does Scott Pierz’s move to the China Region Lakes Alliance as their Executive Director mean to China Lake?

Pierz told us, “ My father instilled in me a nature to participate and give time, to dedicate time, to my community and that’s a community with a capital “C.” That still drives me. I’ve got more to give. There’s more to do. So that’s why I’m making the move to the China Region Lakes Alliance to continue the core programs that have been offered not only to China, but to expand them within the region, and that’s my goal.”

The CLA and CRLA will continue their strong relationship. As the executive director, Pierz will expand the core programs to serve the regional lakes – Webber Pond and Three Mile Pond – that connect with China Lake. These programs are LakeSmart, Courtesy Boat Inspection Program (CBI), Youth Conservation Corps (YCC), and the Gravel Road Rehabilitation Program (GRRP). The strategy behind this organizational shift is that China Lake will be better protected when the surrounding bodies of water are also protected.

What does Stephen Greene see as the future and the greatest challenges ahead for the CLA?

Green responded, “The CLA has been and continues to be a vibrant, effective and constant organizing voice for China Lake protection and restoration. The campaigns it conducts and programs it supports for environmental education, science-based research, watershed surveys, YCC, LakeSmart, boat inspectIons and gravel road restoration have been instrumental in reducing and slowing the phosphorus load to the lake. … As was pointed out in our recent annual meeting, the greatest threat may be the epic task of solving the lakebed phosphorus load.”

Green sees his initial calls to action are to educate, re-engage the membership, and recruit the younger generation to get involved to preserve the lake for future generations. “We owe it to our children to do all we can to secure that destiny.”