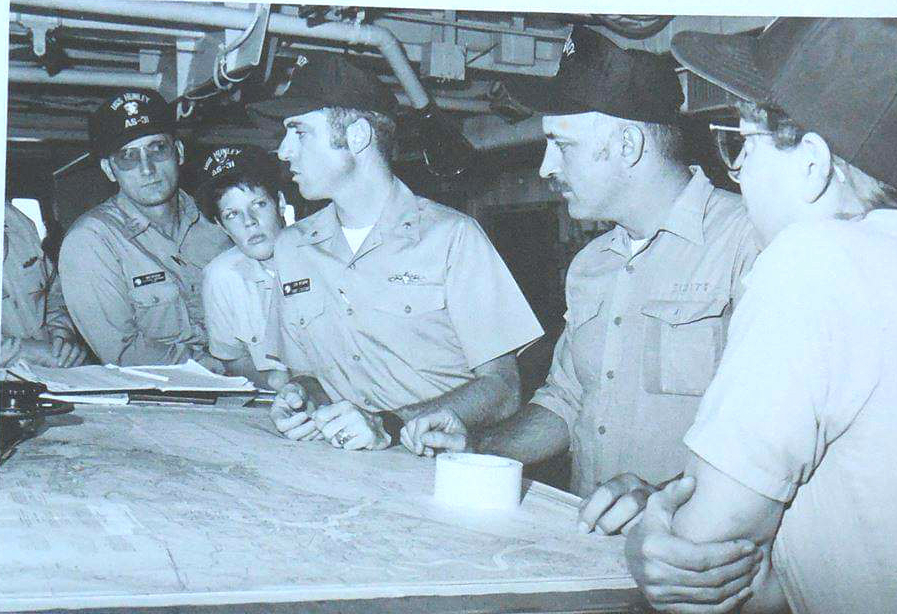 Tina Richard, second from left, in the wheelhouse of the USS Hunley.

Following graduation from Rumford High School, in 1984 Tina Richard, of Clinton, decided she wanted to follow in the footsteps of her father and brother, and join the U.S. Army. When that didn’t work out, she was determined to continue her pursuit to serve her country. Her father served a tour of duty in Vietnam, and she felt the need to do her part.

Following basic training in Orlando, Florida, with Company K125, at a Navy base that no longer exists, she was assigned to the USS Hunley, a sub tender, as a quartermaster. The Hunley was designed to tend most of the long-term requirements of the Polaris Class of submarines. The ship achieved several records and milestones in its service.

Quartermaster is a military term. In many navies, a quartermaster is an officer with particular responsibility for steering and signals. The seaman is a non-commissioned officer (petty officer) rank; in some others, it is not a rank but a role related to navigation.

The term appears to derive from master of the quarterdeck where the helmsman and captain controlled the ship. The duties involve reading charts assisting in the navigational process.

The USS Hunley, AS31, was sent to Holy Lock, Scotland, as she had done several times previously during its commission, to assist in submarine repairs. During Richard’s tour of duty, the Hunley was docked in Scotland for six months, when it was then sent back to the United States, to be stationed in Charleston, North Carolina.

“When I got on the USS Hunley (AS-31) in Holy Loch, Scotland, in January 1987, said Richard, “I started out in deck department. I handled the mooring lines in and out of port. I painted the decks, bulkheads, the anchor chain and the side of the ship.”

Once underway, she drove the ship and kept in contact with engineering about how fast or how slow to steer the ship under the Officer of the Deck during her watch.

Richard came back to the states in Norfolk, Virginia, after six months of being in Scotland. “After being in deck department for awhile, I wanted to find a rate that I could go up in rank so I shopped around and found something I really liked. I became a quartermaster, navigation in and out of port.” She worked directly with the captain and executive officer.

“Duties I did as a quartermaster included, correcting charts, using a sexton, had to know about tides and currents, determined the time of sunrise and sunsets, worked with compasses – the magnetic compass and Gyro compass – and planned for when we went out to sea. I was very good at being out on the weather deck and picking up the navigation stuff so the quartermaster in the pilot house could plot it.

“They called me eagle eyes because I was quick and my eyes were incredible. In August 1989 our ship went to Charleston, South Carolina, to tend SUBRON FOUR submarines.

“In September we were underway steaming east to avoid the wrath of Hurricane Hugo. We were out to sea over a week. Upon our return to port we assisted in the local cleanup and relief efforts. We returned to our homeport in Norfolk, Virginia, in November, in time to enjoy the holidays with family members.”

Richard was discharged from the Navy on August 28, 1990, and returned home to Rumford, as a QM 3.

“I would’ve stayed in but back then they would not let women on many ships. Now the ladies are on all of them, even subs. I didn’t want shore duty and I loved being out to sea doing my job.”

Richard took a year off and then, “I did one year of reserves [because] I was bored. I was not use to sitting around on my weekend duty so I got out as a QM2 after taking the test. Would I do it again? Yes, I would and make a career of it.

“My most memorable memories of being in the Navy was being out to sea and seeing beautiful sunrises and sunsets, watching the dolphins swim at the bow of the ship, going to Scotland, Annapolis, Maryland. seeing the Blue Angels fly, Halifax, Novia Scotia, the buildings were just incredible and the fort I visited had lots of history. Even went on a Canadian Navy ship which was way cool. Made many friends, in fact, I keep in touch with a few of them on Facebook. Some day I hope to go to a reunion and catch up with some of my shipmates.”

It was a different experience for Richard as she served on board the Hunley, which was a coed subtender. At first segregated from the male seamen, the policy was changed later to allow for mixed accommodations. Changes were taking place at an accelerated rate during her active duty, as even the uniforms of the female service members changed during her time of duty.

But, being a quartermaster on board the ship didn’t exempt her from other manual duties. One of those experiences involved having to be lowered down the side of the ship to do some painting on the hull. It was not one of her favorite things to do, knowing there could be sharks in the waters that were only a few feet below.

One of the oddities of the Hunley, as Tina explained, was that it “had a periscope.” She doesn’t know why.

The Hunley was decommissioned in 1994 and turned into scrap metal in 2007. As of this writing, there are only two subtenders left in service.

But, following her discharge from the military, is when she began her career in the American Legion.

She joined the Legion in 2000, and would commute to Lewiston from her home in Rumford. That travel commitment lasted two years. Her subsequent marriage brought her to Clinton, as her husband’s employment was at the SAPPI, Hinckley mill, and she became deeply involved with the American Legion Post #16, in Skowhegan.

In her 19 years of service to the American Legion, she holds the position of historian and chaplain locally, and is historian and first vice president at statewide District #10.

“I love my positions and I love helping other veterans,” she emphasized.

But, her work is far from being done. She is very much involved in veterans’ issues and continues to support military veterans, past and current.