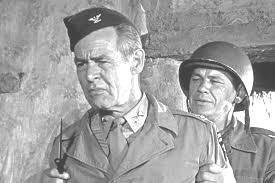 Robert Ryan, left, with Charles Bronson in a scene from the film The Dirty Dozen.

One of the most gifted and, nowadays, under-appreciated actors in Hollywood for over 30 years, Robert Ryan (1909-1973) played many character roles, being his best in films as evil men who were often neurotic, driven, complex. 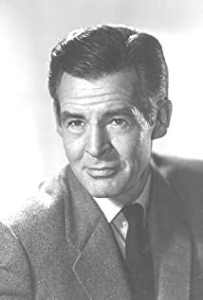 One great performance was in the 1962 film, Billy Budd, based on Herman Melville’s novel. The story was based on the wars for naval supremacy between the British and French navies during the Napoleonic era; Ryan played the evil Master-at-Arms, John Claggart, on a British ship who ordered the flogging of sailors under his command for the most minor infractions, including not tucking a bunk blanket correctly. The half-smiles of enjoyment in his eyes, alongside his poised dignity, during the meted-out punishments attest to Ryan’s precisely-honed talent.

Other movies in a large list were 1947’s Crossfire as an anti-Semetic World War 2 officer; 1954’s Bad Day at Black Rock, as the leader of a dangerous gang of men living in a small desert town; and the same year’s Her Twelve Men, alongside Greer Garson, as one of two nice teachers in a private boy’s school in which Ryan sings and plays the guitar.

In 1944, Robert Ryan joined the Marines and served until late 1945; a friend of my parents told me about having the actor as a drill instructor in the handling of pistols during his boot camp experiences and remembering that he was a very good teacher.

Being a chain smoker, Ryan found out that he had inoperable cancer of the lymph nodes in 1970. But he kept acting . His last film was the Eugene O’Neill play, The Iceman Cometh, with Lee Marvin in the main role as Hickey, in its four-hour movie version; its world premiere was after Ryan died on July 11, 1973, at 63. He lost his wife, Jessica, to cancer in 1972.

Just before he died, Ryan said “I’ve been lucky as hell with my career and my family!”