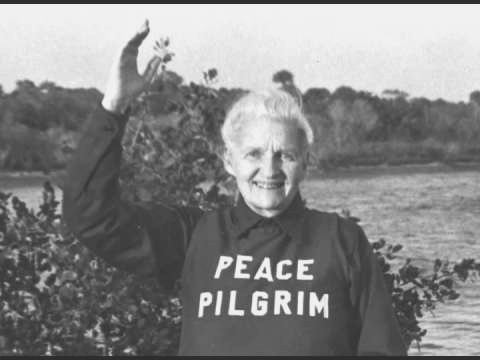 Peace Pilgrim became renowned during her lifetime for crossing the entire United States at least six times on behalf of peace, feeling this leading from God.

She began her 29 years of walking in 1952 with hiking the entire Appalachian Trail in one season. The trail is 2,200 miles/3,500 kilometers of length, it is the longest hikers-only trail in the world, and it extends from Katahdin, in Maine, to Springer Mountain, in Georgia. She also coined the name ‘Peace Pilgrim’ on New Year’s Day, 1953, as to why she was doing these very lengthy distances and why she discontinued her previous name of 45 years.

Mildred Lisette Norman was born on July 18, 1908, and was raised on a chicken farm in Egg Harbor, New Jersey, a community of German immigrants. Her father was a carpenter, her mother a tailor, and she had two younger siblings.

During the years of walks, Peace spoke often at universities and churches and appeared on radio and television, She led an ascetic life, wearing the clothes on her back and taking no food and shelter until offered it.

She was killed in an automobile accident on July 7, 1981, exactly 38 years ago as I write this, being driven to an Indiana speaking engagement.

Peace Pilgrim did visit once or twice in the central Maine area but my interest in her began when, less than a month ago, a cousin of mine texted me photos of her parents, a wonderful aunt and uncle , with the woman at least 50 years ago. Peace Pilgrim’s commitment to walking the longest distances over a 30-year span, to speaking to others about her concerns where the world was headed with its evil tendencies and to enduring the hardships gladly that came with her stand for peace and good will – these were what resonated with people of conscience in their hearts whatever their world views might be. They do with me.