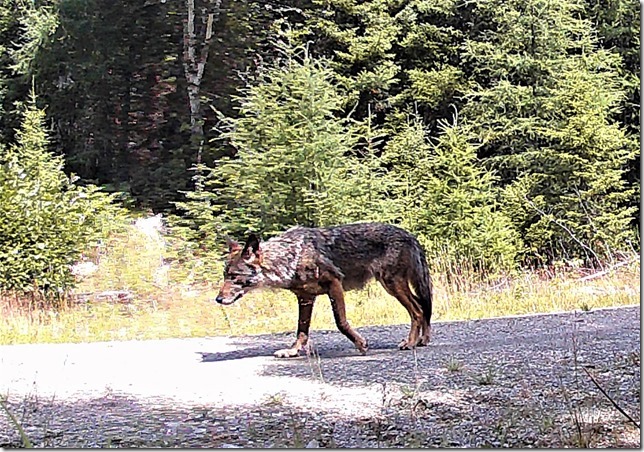 This week, I’m going to give my space to John Glowa Sr., of the Maine Wolf Coalition, with an update on the mounting evidence that wolves are attempting a comeback in the Northeast:

DNA analysis of an 85-pound canid shot by a New York hunter in December 2021, has verified the animal to have been a wolf. The animal was killed in central New York and the hunter posted photos of the animal on social media. At the time that it was killed, wolves had been removed from the federal Endangered Species list. They have since been reinstated to the list after a successful lawsuit by wildlife advocates.

In a collaborative effort between the Northeast Ecological Recovery Society (NERS) and the Maine Wolf Coalition (MWC), the hunter graciously provided tissue samples of the animal for DNA analysis, some of which were sent by NERS at considerable expense to the Natural Resources DNA Profiling and Forensic Centre at Trent University in Peterborough, Ontario, Canada. We thank the hunter for his cooperation, without which we would not have gotten samples for analysis. The findings concluded that the animal was effectively 100 percent wolf with DNA from Great Lakes wolves, Northwest Territories gray wolves and Eastern wolves, in decreasing order of DNA percentage. The complex nature and purity of the wolf DNA may be consistent with a wild wolf that dispersed from Canada where various wolf populations are known to intermingle.

It has long been wrongly believed that the St. Lawrence River and surrounding area serve as a barrier to wolf dispersal. This animal is the latest of at least ten wolves known to have been killed south of the St. Lawrence River since 1993 which includes wolves killed in Day, New York, in 2001, and Sterling, New York, in 2005. Other wolves have been killed in Massachusetts, Vermont, Maine, New Brunswick and Québec. MWC, through our own research, documented the first live Eastern wolf in Maine in through scat we collected in 2019.

The presence of wolves in New York is to be expected, given the state’s proximity to documented wolf range in Canada and its abundant habitat and prey. There are tens of thousands of square miles of potential wolf habitat in the northeast, much of it in New York, which makes the northeast ideal for wolf recovery. In fact, wolves live just sixty miles from the New York border, a distance that a dispersing wolf could travel in a day or two.

The New York State Dept. of Environmental Conservation (NYSDEC) has long denied the presence of wolves in the state. NYSDEC agents reportedly took tissue samples of the animal for DNA analysis but the agency has issued no statement regarding their results.

The killing of this animal is just the latest stone in a growing mountain of evidence proving that wolves are attempting to recolonize the northeast U.S. and maritime Canada south of the St. Lawrence River. It is past time for the state and federal governments to take action to protect wolves in the northeast. Denying their existence, failing to conduct the necessary research to determine their status, and refusing to give them the protection to which they are entitled are all contrary to state and federal law and the intent of the Endangered Species Act.