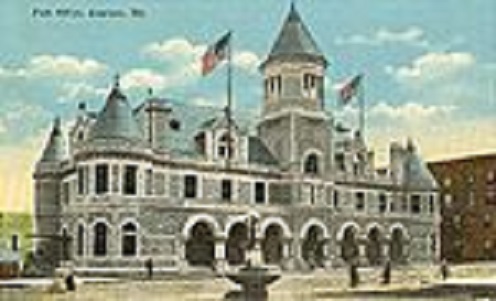 The previous article talked about postal service in the southern part of the central Kennebec Valley. This article completes the story with summary postal histories of Sidney, Fairfield, Benton, and Clinton, plus miscellaneous notes.

As mentioned in last week’s article (see The Town Line, Oct. 15), Henry Kingsbury found Sidney had six post offices at various times. Alice Hammond built on his information in her history of Sidney to provide additional information on several of them.

The earliest Sidney post office dated from 1813, when Stephen Springer became postmaster on March 13. It was on River Road, location unspecified.

The Sidney post office was probably toward the southern end of town, because Hammond wrote that the North Sidney post office opened in January 1854 toward the north end of River Road. According to Kingsbury, first Postmaster John Merrill served until August 1867, when Stephen Springer took over and served for almost 16 years. (With a 41-year interval between appointments, it was probably not the same Stephen Springer.)

Meanwhile, the Sidney Centre post office opened at Bacon’s Corner, on Middle Road, in 1827. (Google locates Bacon’s Corner at the intersection of Middle Road with Dinsmore and Shepherd roads, not far south of the James H. Bean School.)

Four years later, in 1831, the West Sidney post office opened for the first time. Hammond wrote that it had the distinction of being discontinued four times “for want of a proper person to run” such an undistinguished and unprofitable operation. (A contemporary map on line identifies West Sidney as the intersection of the south end of Pond Road with Route 127.)

Sidney’s fifth post office was named Eureka – Hammond gave no explanation — and was on the north end of Middle Road, toward the Oakland line. Opened in 1879, closed in 1886 and reopened in 1887, it closed for good in 1902.

The final Sidney post office, which operated only from 1891 to 1902, was named Lakeshore. Neither Hammond nor Kingsbury suggested a location; presumably the lake referred to was Snow Pond (Messalonskee Lake).

Hammond wrote that Martha C. Bacon was the first Lakeshore postmaster; Moses Sawtelle followed her, but she had the job back when the office closed permanently in 1902. Hammond’s history has a photo of former post office “pigeon holes” – rows of open-front wooden boxes that appear to be four or five inches square – in the Bacon house.

The Fairfield Corners post office (1822 to 1882) was at what is now Nye’s Corner, on the Kennebec between Shawmut and East Fairfield.

The Kendall’s Mills post office is undated; the history says its name was changed to Fairfield in 1872. It was relocated at least twice before 1938, when the current building, which the history says cost $50,000, came into use in January.

East Fairfield is now Hinckley. The Fairfield history has an undated photo of a large three-story building with two-story and one-story annexes, identified as Palmer’s Store and the Hinckley post office.

The history gives no date for the establishment of the post office in the mostly Quaker North Fairfield settlement. It closed in 1908; a 1913 photo of the village shows the building and adjacent store. 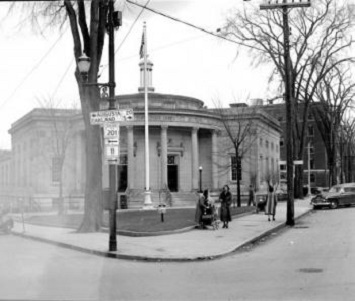 There are no dates for the Larone post office, either. The history says after the village grew enough to rate mail service, two residents of nearby Norridgewock helped villagers petition successfully to get mail delivered by the stagecoach that ran from Waterville to Norridgewock.

The Shawmut post office was called Somerset Mills from 1853 to 1889, when it became Shawmut.

Clinton’s mail was carried after 1816 by a horseback rider going from Winslow to Bangor, Kingsbury wrote. The earliest of Clinton’s three post offices was established June 13, 1836, at East Clinton (after July 2, 1842, simply Clinton), and the rider began coming twice a week. About 1850, the stagecoach driver going from Augusta to Bangor became the mail carrier.

On June 10, 1825, the Pishon’s Ferry or North Clinton post office opened on the east bank of the Kennebec River opposite Hinckley. The third post office, at Morrison Corner, was established Nov. 10, 1891, Kingsbury wrote. (The contemporary Google map shows Morrison Corner as the intersection of Battle Ridge, Peavey and Hinckley roads.)

Benton separated from Clinton in March 1842, was Sebasticook for eight years and in March 1850 became Benton. According to Kingsbury, the first two of its four post offices also had a habit of changing their names.

The rural free delivery (RFD) system began operating in Sidney and Vassalboro in 1901, Hammond and Alma Pierce Robbins wrote. Mail from Augusta was distributed to roadside boxes in those two towns. In 1902, Oakland and Waterville also began RFD service, with the north end of Sidney getting mail from both. As Hammond describes the expansion of the service in Sidney, service from Augusta replaced the Sidney and Sidney Centre post offices in 1901 and the West Sidney post office in 1902; Waterville replaced North Sidney in 1902; and Oakland took over Eureka and Lakeshore in 1902.

Ruby Crosby Wiggin wrote that RFD started in Albion July 1, 1903, with three mailmen, Charles Byther, Arthur Skillin and Elmer Wiggin. Each mailman was directed to ask residents on his route to buy and put up a mailbox. Historian Wiggin quotes mailman Wiggin’s account of the resident who scoffed at this new idea and promised to buy a mailbox after he saw Wiggin delivering the mail.

In Palermo, Milton Dowe wrote, a petition to institute RFD was circulated early in the 20th century; there was a lot of opposition, but the system was inaugurated on Nov. 15, 1904. The East and Center Palermo post offices were discontinued immediately; the one at North Palermo stayed open a few years longer.

Waterville, like Augusta, has a historic post office building, located at 1 Post Office Square, in the southern triangle of the X-shaped intersection of Main Street, Elm Street, Upper Main Street and College Avenue. The elaborate one-story masonry building, now housing commercial establishments, was added to the National Register of Historic Places on April 18, 1977.

Wikipedia says the Greek Revival building was built in 911; the architect was James Knox Taylor. Taylor was the supervising architect for the U. S. Treasury Department from 1897 to 1912, giving him credit for hundreds of federal buildings all over the country.

Current post offices in the central Kennebec valley in 2020, alphabetical by town or city, from U. S. Postal Service websites:

Benton apparently does not have a post office within town boundaries. ZIP 04901.

Sidney apparently does not have a post office within town boundaries. ZIP 04330.

LETTERS: What about the USPS? Pie sale planned in conjunction with awards ceremony
Scroll to top