In previous pieces there have been references to local newspapers, especially the Augusta-based Kennebec Journal. Both it and its sister publication in Waterville, the “Morning Sentinel”, have had long lives; but they are not and never have been the only newspapers in the central Kennebec Valley.

Here is a partial list of 18th and 19th century Augusta and Waterville papers, excluding monthlies and student and most other specialty publications. The Library of Congress list of newspaper holdings has others. 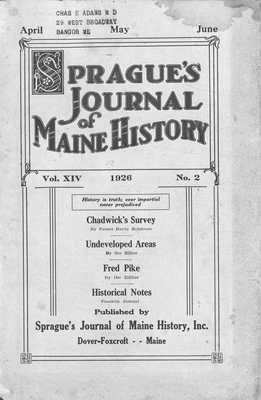 An excerpt from an on-line source says the Tocsin and the Kennebec Intelligencer were the earliest inland papers in Maine. The first Maine newspapers were published in Portland beginning in 1792. Kennebec Valley staff members worked hard to bring local people news from London in 61 days and from the United States Congress in Philadelphia in 16 days.

The Kennebec Journal had several owners in the mid-19th century, including briefly (1854-1857) James G. Blaine. Henry Kingsbury, in his Kennebec County history, describes Blaine’s management as “able and vigorous.” During part of the Civil War, the paper published a small daily supplement with current news, received by telegraph. At the beginning of 1870, Howard Owen, Charles E. Nash and Alden Sprague made the Daily Kennebec Journal the first successful daily paper in Augusta, while continuing the weekly version that Kingsbury says acquired subscribers state-wide. 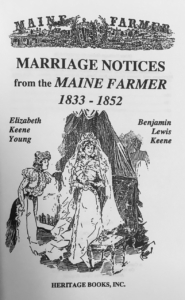 Early in his Augusta career, Kingsbury wrote, Smith wrote an article calling a Belgrade resident a deserter during the War of 1812. The Age’s publisher was tried for criminal libel and was acquitted, giving the paper valuable publicity.

In the early 1840s, according to Kingsbury, The Age and the Kennebec Journal made an agreement under which each published on three alternate days, creating Augusta’s first version of a daily paper. He did not say how long the arrangement lasted. From 1844 on The Age changed ownership frequently; an Augusta printer named Gilman Smith was the owner when the paper was discontinued during the Civil War.

In her Albion history, Roby Crosby Wiggin describes and quotes from a Thursday morning, Feb. 27, 1851, copy of Maine Farmer, found by Albion residents remodeling an old house. The paper then had a circulation of 5,500 and cost four cents a copy. Annual subscription prices were $1.75 paid in advance, $2 paid within a year and $2.50 paid more than a year late. Anyone who signed up six paying subscribers got a free subscription.

(Samuel Lane Boardman [1836-1914] wrote books on history, including Peter Edes’ life in Boston and in Maine; on Maine agriculture; on Maine horse-racing, and on ornithologist George Augustus Boardman [1818-1901], who worked in eastern Maine and New Brunswick. One hopes that George was not Samuel’s father, because Wikipedia says George’s only marriage was in 1843.)

In Waterville, Kingsbury wrote that the first attempts to provide newspapers were short-lived. According to Kingsbury and to Henry C. Prince (who was editor of The Waterville Mail when he wrote the chapter on the press in Edwin Carey Whittemore’s 1902 history of Waterville), the early papers were:

In May 1841 (Prince) or 1842 (Kingsbury), Daniel Ripley Wing and William Mathews founded The Watervillonian, described as “a literary and family journal.” Prince quotes Mathews as sarcastically describing the paper starting with 400 subscribers and by filling its pages with dead authors’ works reducing the number to 250 in a year. The paper ceased publication after that first year; Mathews said the publishers earned $600.

Mathews, Wing and Mathews’ brother Edward started the Yankee Blade in June 1842. A new part-owner moved it to Gardiner in August 1843.

In April 1847 Charles F. Hathaway (later to found the Hathaway shirt factory) started The Waterville Union. Prince says it failed after 14 weeks, mostly due to “stringent rules adopted and enforced” about payment for subscriptions and ads (it sounds as though Hathaway wanted his money on time).

Hathaway sold to Ephraim Maxham, who started The Eastern Mail (first issue July 19, 1847) and on Sept. 4, 1863, renamed it The Waterville Mail. Wing had been working for Maxham; in 1849 he bought a half interest in the paper and stayed with it until his death.

The Mail endorsed the first Republican Presidential candidate, John Charles Fremont, in the 1856 election, but it only later became a reliably Republican paper, Prince wrote.

In 1886 two of Daniel Ripley Wing’s sons, Charles G. Wing (or Charles Burleigh Wing, according to an on-line genealogy that says Daniel Ripley Wing’s wife was Ann Elizabeth Burleigh) and Daniel Frank Wing, bought the Waterville Mail from Maxham and made it one of Maine’s highest-quality local weeklies. It went through more ownership changes before folding in May 1906.

The first issue of The Waterville Sentinel appeared Wednesday, Dec. 1, 1880, published by M. A. Leger and E. O. Robinson, who believed Waterville would grow fast enough to justify two newspapers. In the next two decades the newspaper went through multiple ownership changes, and, Prince wrote, several changes in publication day – Wednesday in 1880, Friday as of February 1881, Saturday beginning in May 1884.

In December 1896 then-owner Samuel Appleton Burleigh of Vassalboro tried a bi-weekly appearing on Tuesdays and Fridays. The weekly publication resumed Friday, April 16, 1897. In November 1897 a section in French was added; it lasted a month.

On Wednesday, Feb. 18, 1887, the first issue of Ben Bunker’s unabashedly political The Kennebec Democrat appeared in Waterville. Three months after Bunker’s death in March 8, 1894, Augusta people bought the paper, moved it to Augusta and renamed it “The Maine Democrat”, Prince wrote.

The former Home Farm (see above) moved from Augusta to Waterville and reappeared as the Eastern Farmer at the end of September 1887. Varney says Boardman still owned it; Kingsbury says Hall C. Burleigh and the Wing brothers (who were publishing the Mail) took it over, found it a “financial incubus” and killed it, selling the list of subscribers to the Lewiston Journal in April 1888.

The owners of the Waterville Mail added the Waterville Evening Mail as the city’s first daily newspaper beginning on Jan. 29, 1896. Prince wrote that the four-page paper, still published in 1902, was primarily a source of local news, though world events were mentioned.